Cecil Skotnes would traverse the use of several mediums over his lifetime of creation, but the attraction of woodcutting for Skotnes was in part the rarity of practice in this medium during his studies at Wits in the late 1940s. Skotnes maintains that the word ‘woodcut’ was not even mentioned during his years at art school. His interest was also in part the extreme technical difference to the traditional medium of painting and he was deeply interested in the iconographical challenge woodcutting posed. During his artistic career, Skotnes would strive to create a particularly African idiom.

Frieda Harmsen writes in a chapter of her Cecil Skotnes book of his initial interest in creating a set of iconographic symbols:

“Woodcutting offered Cecil the possibility of finding a new form for the symbolism he increasingly began to attach to a particularly local vision… It was undoubtedly initially through the medium of printing that Cecil was able to produce what later became described as work which had at its core ‘a spirit of Africa’. This is particularly significant if one notes that printmaking, which is now an almost universally accessible and characteristically southern African medium (lino cutting was introduced into Polly Street by Cecil in the early sixties), was with few exceptions unexploited anywhere in the country at the time.”

Skotnes was greatly influenced by collections of African woodcarvings and Benin bronzes he discovered during his travels in the early 1950s. Returning to South Africa the following year, he would often impress the importance of his approach saying “I could not think in European terms. My approach had to originate here, otherwise my art would be a lie of little importance.” Consequently his designs became more harsh in appearance to evoke the African atmosphere of arid savannah and thorny bush. (Harmsen, 1996.)

In a collaborative endeavour with the poet and artist, Stephen Gray, Skotnes recreated in colour 13 woodcuts depicting scenes of a man attempting to save lives aboard the wrecked ‘Jonge Thomas’ ship. The end result, a portfolio entitled The White Monday Disaster, served to document an historical event based on the eye-witness report by Professor Charles Thunberg, on a visit to the Cape in 1773.
The series of poems and woodcuts follow Thunberg’s account of a man, Wolraad Woltemade, who attempted to save, by horseback, the many people clinging to the hull of the ship after it was forced to shore by a gale in Table Bay. The ship was seen to crack down the middle and many people attempted to swim to shore but the current from the nearby Salt River was too great and many were carried out to sea. Woltemade, delivering food to his son – a soldier posted to stand guard and keep order among the growing number of spectators – witnessed the increasing panic as he arrived and urged his horse into the sea. Arriving at the wreck, he pulled back to shore two people at a time, the survivors clinging to the tail of the horse, until both he and his horse were exhausted. Woltemade saved 14 of the 53 survivors. 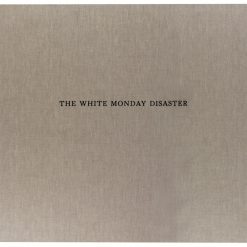 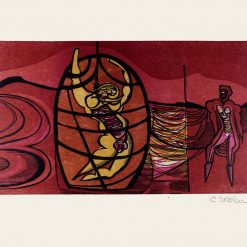