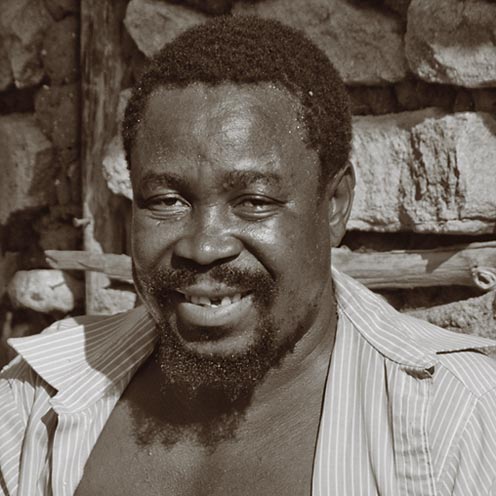 Born in 1965, Fiyani John Masondo, who signs as Johanni, has spent most of his life as a farm labourer, picking up skills that are never put to use, although they would make an impressive CV. Farm labourers, of course, don’t get to have CVs. They have a temporary existence, based on temporary jobs, with long spells of nothing in between.

Two of Fiyani’s employers were murdered – which meant the end of work. Other jobs were seasonal or affected by the market slump. He’s not a talkative person, so one has to work alongside him, digging in a field, to discover the wide range of knowledge he has acquired about farming. His experience has been diverse and practical. He’s learnt and observed – and lost another job.
In 1999, during another spell of unemployment, Fiyani signed on for temporary work with a poverty relief programme, clearing land for the plough. When that work came to an end, he joined a copper wire class, sitting with twelve-year-olds and learning from the beginning.

It wasn’t easy for a man with such a strong sense of manhood. He is independent, stubborn, slow, and methodical – and he faltered learning to bead (traditionally seen as a woman’s activity). He would come into his own with the use of brass beads on copper baskets for metal is perceived as a male element. Fiyani was comfortable with brass, a ‘male’ decoration – heavy and assertive, forged out of rock.

Necessity has made him come to terms with glass beads, and his skilled coloured beading has drawn admiration from the women. But that’s a necessity. His real love is metal – and his best work is metal with no beading at all.

Sizani Mbatha started doing beadwork when she was in a prison cell at Tugela Ferry, held as a witness under a notorious 90-day-detention law. Her case was successfully challenged in court, making her part of legal history.

The police had agreed to let Sizani Mbatha work with beads as a pastime, but as soon as they released her from jail, she returned to her primary job: building dams with stones and cement. A talented stonemason, she has completed forty-one small dams – and excelled at all the other tasks she has undertaken since she started working at Mdukatshani in 1975. She has led children on soil reclamation and gardening projects, helped to fence kilometres of bushy hills, dug boulders out of stony fields and became a skilled crafter.

Born 1954, Sizani Mbatha never went to school but she can read and write and keep records – and is avid for any experience that can expand her horizons. Her childhood wasn’t easy nor secure. She grew up on a succession of labour farms in the Weenen district, and in 1969, when thousands of farm workers were forcibly evicted from the Weenen farms, the Mbatha family settled at Msinga.

A slender woman with an indomitable will, she is versatile, headstrong, determined – and light-hearted. She tackles life as a combatant. She wants to be a winner, ahead of the rest, but she can never quite suppress an instinct for joy, and if there’s laughter on the path, you know Sizani is on her way.

Sizani Mbatha returned to craftwork about ten years ago when a poverty relief project failed to materialise, and she realised there was little chance of making a living off the land. She applied herself to weaving copper wire, and gradually gaining the skill to weave copper baskets. She wove the first bowl with copper beads purchased by RFC. Its beauty and intricacy led Rob Adamson to commission a gold bowl – which kicked-off the Threads of Africa project.

Text adapted from correspondence between the Mdukatshani Trust and JMFA, 2011.