Sometimes we come across works by artists and we want to speak to them about their work but can find no information about them or their whereabouts. We then rely on the web and social media to find snippets about them, and sometimes even this brings us no results! We’re hoping we can find this artist, Ada van de Vijver, through our network!

One of the nice things about what we do is often just looking, conjecture, tumbling down rabbit holes and ending up with more questions than answers. Julia and I were looking at these screenprints contemplating the size of the works in relation to the actual objects, discussing connections to pop art and the artist’s intention of representing these objects in their used and discarded state.
These are iconic images; Lion matches specifically iconic to South Africa, and Coca-Cola as a universally known brand. Conferring enduring fame to objects by immortalising them in a work of art is not a new idea, not even in their discarded state, but van de Vijver has managed to delicately hint at their context a little closer to home; lightly imprinted on the coke can top a Keep South Africa tidy is written, and below the deconstructed box of emptiness, The dead LION is inscribed in the widely-known Lion matches font. The Coke inscription seems obvious, but perhaps ‘the dead LION’ empty box becomes obsolete in its deconstruction.

We’re going to carry on with our research and will keep you all updated on our social media channels, so follow us there if you do not already!

(A small fragment of trivia! In one of our rabbit-hole-research tumbles we found out that matches were first manufactured in South Africa in 1885 and made by hand, and eventually the offshoots of these manufacturers and other match-making companies would amalgamate and become The Lion Match Company. Coca-Cola was, coincidentally, invented in the mid-1850s by a pharmacist and the font penned by his bookkeeper.)

UPDATE – 26TH OCT 2021
In our quest to find out more about Ada van de Vijver , we heard from her lifetime partner, Jules van Vijver, who worked with Ada in the production of these prints.

Sadly, Ada van de Vijver died in July 2018, in Dordrecht, The Netherlands, after prolonged illness. Born Ada Hobijn in Batavia, Indonesia, in 1947, she adopted her partner’s surname during her stay in South Africa.

The two screenprints on sale below are part of a series produced in the summer of 1974 or 1975, and were some of the first works produced by the artist after arriving in South Africa.

For this series, Ada gathered discarded flattened beer and soda cans, cigarette cartons and empty matchboxes from a bus terminal at the end of the street where she lived in Durbanville, Western Cape. After selecting the objects, she drew them in opaque black in on ‘Kodatrace’, followed by colour drawings, on sheet per colour, totalling approximately six sheets per print.

Jules then transferred Ada’s drawings with UV light sensitive stencil material onto screens and printed them according to Ada’s printing instructions and choice of colours. Each print had a varnish like finish “to give it a luxurious shine, in conscious contrast with the subject matter.”

According to Jules, the note ‘Keep South Africa tidy’ “is meant as a satirical comment on apartheid, a system that in Ada’s view perversely aimed at a ‘clean’ ideological solution for a complex social-political multicultural reality. And indeed the waste in the sand of the bus stop, associated with the consumption of iconic industrial beverages and tobacco products by waiting black people, refers to a not so clean reality.” Jules concludes “Ada’s work in South-Africa had strong satirical undertones and often referred to the social and political realities of the day.”

Thank you to Jules van de Vijver and our art world colleagues for all the help in this quest. 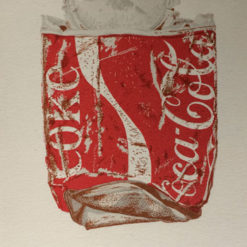 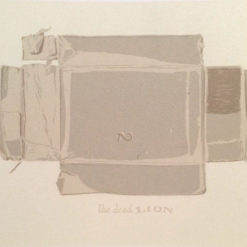