I’ve been thinking about Susana’s previous Duo choice and her meditation on why she loves this country so much. It made me think about all of the cities and homes I’ve lived in across South Africa. These ventures into geographic nostalgia lead me to thinking about how much of this place that I live in, and which I love so much, I haven’t seen. In turn, this lead me to thinking about how many places I haven’t been to but depictions of which I have seen and that artists are often responsible for pushing that particular window open for me.

I love Johannesburg. It has a very specific feeling, and it holds a specific feeling for many people, both visitors and residents. You’ll hear often that “people from Jo’burg are so friendly” or “the city has so much energy.” I think it has a feeling that can be isolated and is akin to freneticism; an uncontrolled and fast energy that you are either moving with or against.
When I think of depictions of cities, Hermann Niebuhr always comes to mind, as does David Koloane and, a discovery of an artist for me in only recent years, Simon Parkin. Not a part of this Duo but worth looking at is David Koloane’s Mahlathini Street III.

Simon Parkin has a very particular style. His 2015 depictions of the inner city of Johannesburg are attentive and meticulous. The nature and view of this particular city is not a pristine or delicate one yet, somehow, Parkin holds to light the grimy streets and sidewalks, spilt with people’s marks and existence, while simultaneously cultivating a longing to be walking those sidewalks.
In a similar way, Hermann Niebuhr’s depictions of the city falls into the study of both urban decay and a viewing of the city as an attractive, and even alluring, place. He depicts Johannesburg from many vantage points- the highway, inner-city rooftops. He pays homage to the city in many forms: at sunrise, at dusk, from afar, from above. His works remind me of arriving in Johannesburg just after sunset when the inner-city lights begin to cascade across the vast expanse of it, as if set off by a domino chain.

Both artists manage to capture the nature of a particular place, as if documentarians of a space ever-complex and ever-shifting, and, so, this week’s Duo is an ode to the city; its views, its sidewalks and its varied, from-all-over residents who notice and bear witness to these spaces. 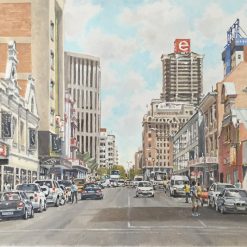