Duo returns with another discussion between Candice and Susana. This time, Susana chose a pigment print by Siemon Allen, Damaged Archive (Soweto), and Candice responded with Playing for pleasure, a linocut by Lucas Bambo. Their conversation revealed multiple layers of interpretation for the works they chose.

Siemon Allen collects, organises and displays artefacts that explore the complexity of ‘South African identity and its branding’ from the point of view of an artist of the South African diaspora. Damaged archive (Soweto) depicts in detail a vinyl record released in 1974 by the Soweto Boys – a Mbaqanga instrumental group.

In Allen’s words for ArtThrob Portfolio 6:
‘This work attempts to examine an image of South Africa that is constructed external to the country. To some extent it speaks to what I feel is a kind of separation from the source, and leads me to consider how much of this work is, at its core, an investigation into notions of branding and identity through displacement.’

The record presented by Siemon Allen was created two years before the Soweto Uprising, during a very radical time. This takes us to the provocative title chosen by Lucas Bambo for his linocut – Playing for pleasure. Usually, Bambo gives descriptive titles to his works, but in this instance, he is seemingly challenging the status quo. We play music for various reasons and, in this case, Bambo’s musicians are playing for pleasure. Like the Soweto Boys, who were making a statement by playing a music genre with Zulu roots during an extremely oppressive time for people of colour, expressing their identities and challenging the regime who tried to destroy the cultural identities of a large group of people.

Another common aspect of these two works is how both artists need to reconcile their interests in the world of the political with the aesthetic language. While Siemon Allen does this through the reinterpretation of the ephemera he collects, Lucas Bambo does it through the depictions of his direct observations of life in South Africa.

Despite their different outcomes, both artists have similar methods of interpreting South African identities through a critical lens to show the viewer its complexity.

Follow us on our social media pages for more details on the conversation between Candice and Susana. 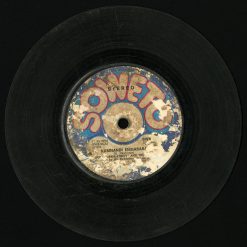 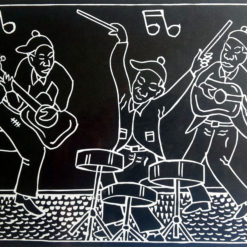