The choice of these two works is a reminder of the effect of irresponsible human activity on our planet.

The contrast of John Muafangejo’s Adam and Eve allegory of an idyllic world where fauna and flora live in harmony comes in stark contrast with the destruction left behind, in 2003, by the tropical cyclone Japhet, here depicted by Mishek Gudo.

Heavy rainfall brought by Japhet followed a prolonged drought and caused extensive damage to crops, and destroyed human and non-human life. For those who lived it, it was chaos and despair, which Gudo recreates to perfection. As we are all very much aware these cycles of extreme weather phenomena have become more frequent and are becoming commonplace.

In Muafangejo’s linocut, god is presented as the creator of the world and all things in it, his hands seem protective of his creation. Eve has given the apple to Adam, who is about the bite it, while the devil lurks in shadows.

Adam and Eve were expelled from the Garden of Eden for not following the rules imposed by an irate god who wanted to protect the world created. Is mother nature doing the same? 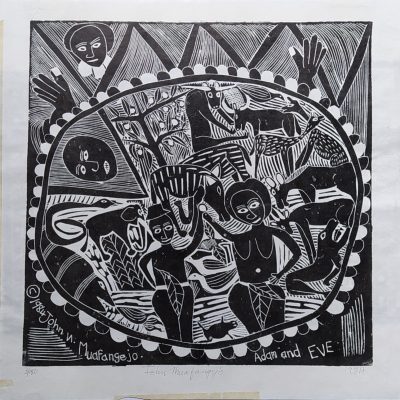 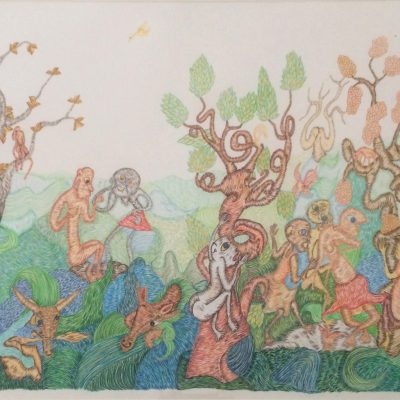