The two works of art in this duo, Anna Alcock’s Guardian Angel and Circular form by Cecil Skotnes, were chosen not only for their shared medium or their circular formation but also for the tenderness and softness of action that both works evoke.

Skotnes was attracted to the iconographical challenge woodcutting posed and his first woodcut prints were of landscapes. Their impetus was natural form and his exploration of a landscape’s spatial conventions would later result in the incised figurative panels we have come to know as broadly representative of his work.
Circular form is unusual; it is not presented as the artist’s widely known incised panels, and it is neither clearly figurative nor a conventional landscape. Its intriguing shape lies more in its ability to transform: it could be a forward folded form or, perhaps, a compressed landscape of lines. When viewed alongside Anna Alcock’s Guardian Angel, it seems as though the forward-reaching, vertical lines of Skotnes’s circular form could unfold into the arms of the guardian in Alcock’s embracing figure; a continuous cycle of morphing from abstract form to representational form and back again- a cyclical process.

Both artists inspire a sense of spiritual mystery in their bodies of work- Skotnes developing later on in his career an interest in religious archetypes and Alcock exploring mythology. I find it fascinating, having studied printmaking but never having extended my hand to woodcuts, that a hardened material could be shaped so tenderly into images so delicate and closely held by stark, incised lines and black ink, making the artists masters of stories from comparative mythologies. 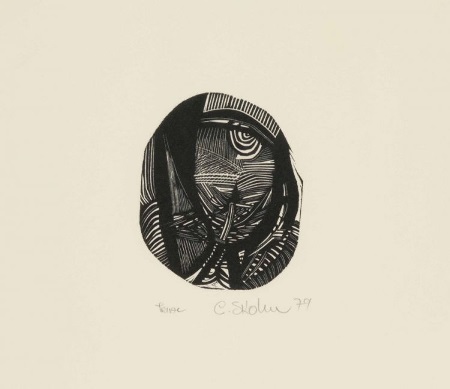 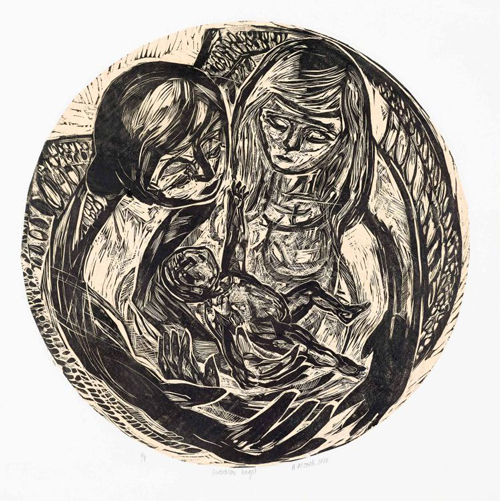